A downloadable Visual Novel for Windows, macOS, and Linux

080 is the pride of Lilith Hall. She does exactly as she's told, she get's perfect grades, and she's never lost a single battle.  All her life she was taught the only thing that matters is her future Ringmaster; but when an outsider is brought in, she gets a taste of what the outside world looks like. She must choose between a temptation she's never known, or the life she's always wanted.

This visual novel is intended for mature audiences and contains sensitive content that may be disturbing or difficult to read, including the following themes:

In Chanelcrest, humans are considered far inferior to their counterparts, reavers. Lacking the strength, wealth, or abilities of reavers, most humans have no choice but to sell themselves into virtual servitude in order to make a living.

The most common form of entertainment in Chanelcrest are arena-style tournaments that pit two humans up against each other for sport, with reavers called Ringmasters dictating their every move. It's such a lucrative business there are facilities that train humans especially for this purpose.

That brings us to Lilith Hall.

Inside this all girl training facility, humans undergo a strict regimen of schooling and physical training to prepare them for the harsh world of the arena. They're taught from birth that their only purpose is to serve their future Ringmaster as Harlequins that act as equal parts battler and servant. With not even a name, the trainers refer to them by numbers, telling the humans their future Ringmaster will name them if they so choose.

The road to being a Harlequin is filled with pain and suffering, but it's the only life they've ever known. 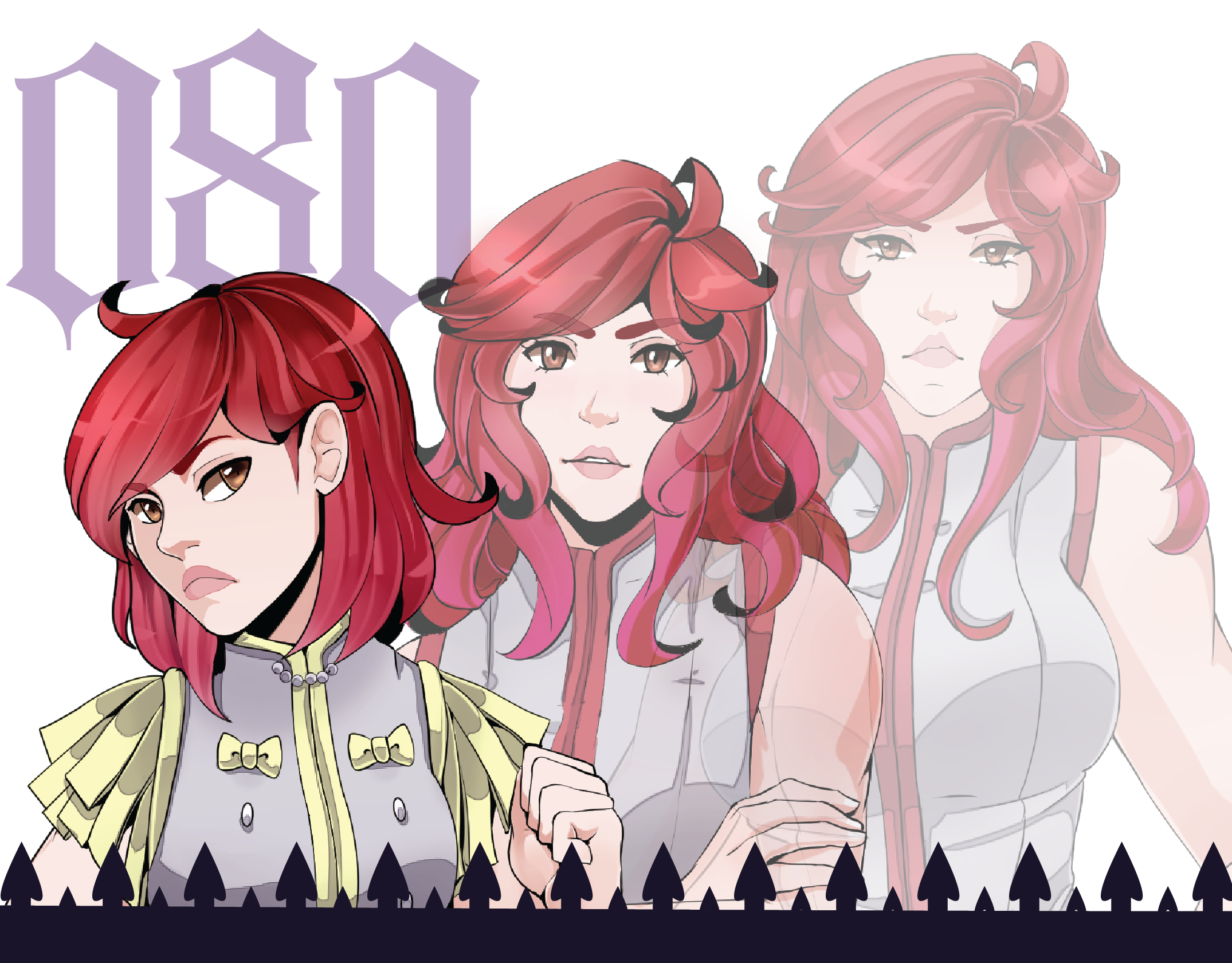 Number 080  was the child of a previous inhabitant, and has been raised in Lilith Hall since she was a baby. Her entire life has revolved around becoming the ideal Harlequin, and she's made it her goal to be the best. She has little patience for weakness and strives for a perfection she believes perfectly attainable. 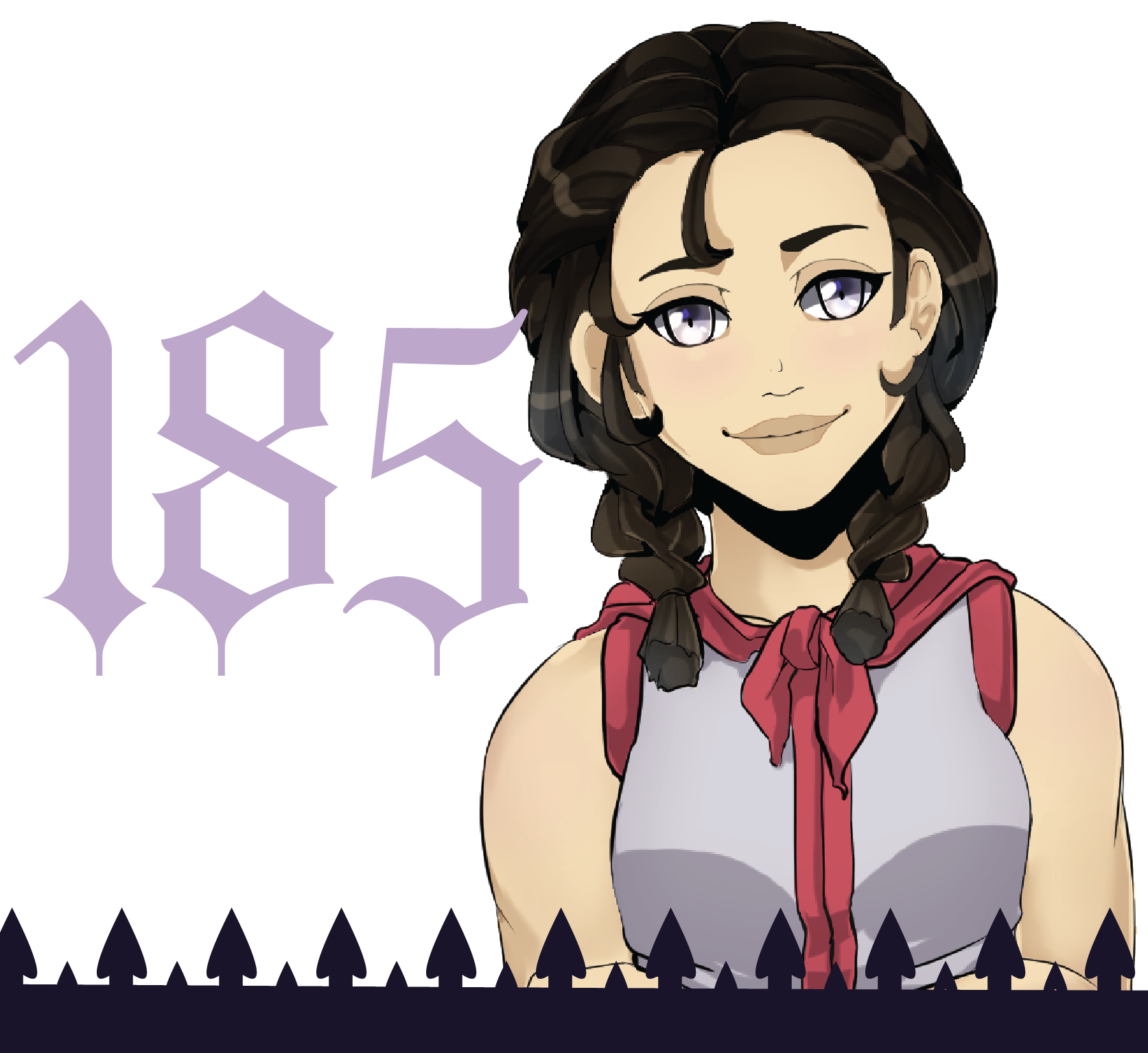 185 is new to the facility, and already hates it. Having grown up in a cushy household, she can't keep up with these girls who've been training for years. 080 is her roommate, and they struggle to find common ground. 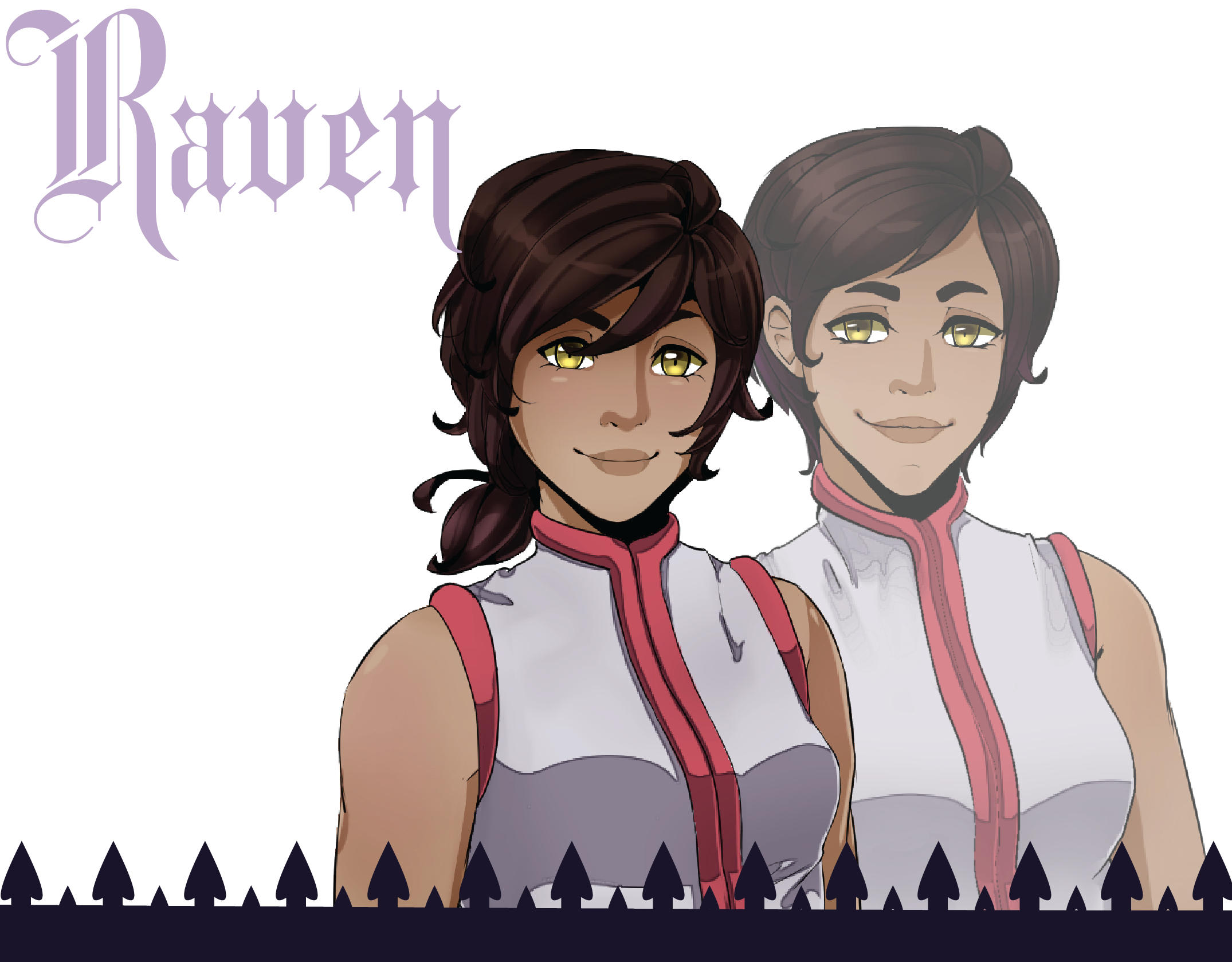 Raven was living in an orphanage before she ran away at 15 to try and make it on her own. She was found on the street fighting for stolen food by a reaver, who convinced her to be contracted as his Harlequin. They joined a circus, and she was one of the top performers until it was discovered she was participating underage. The authorities, after pulling her out and breaking her contract, offered her to Lilith Hall. 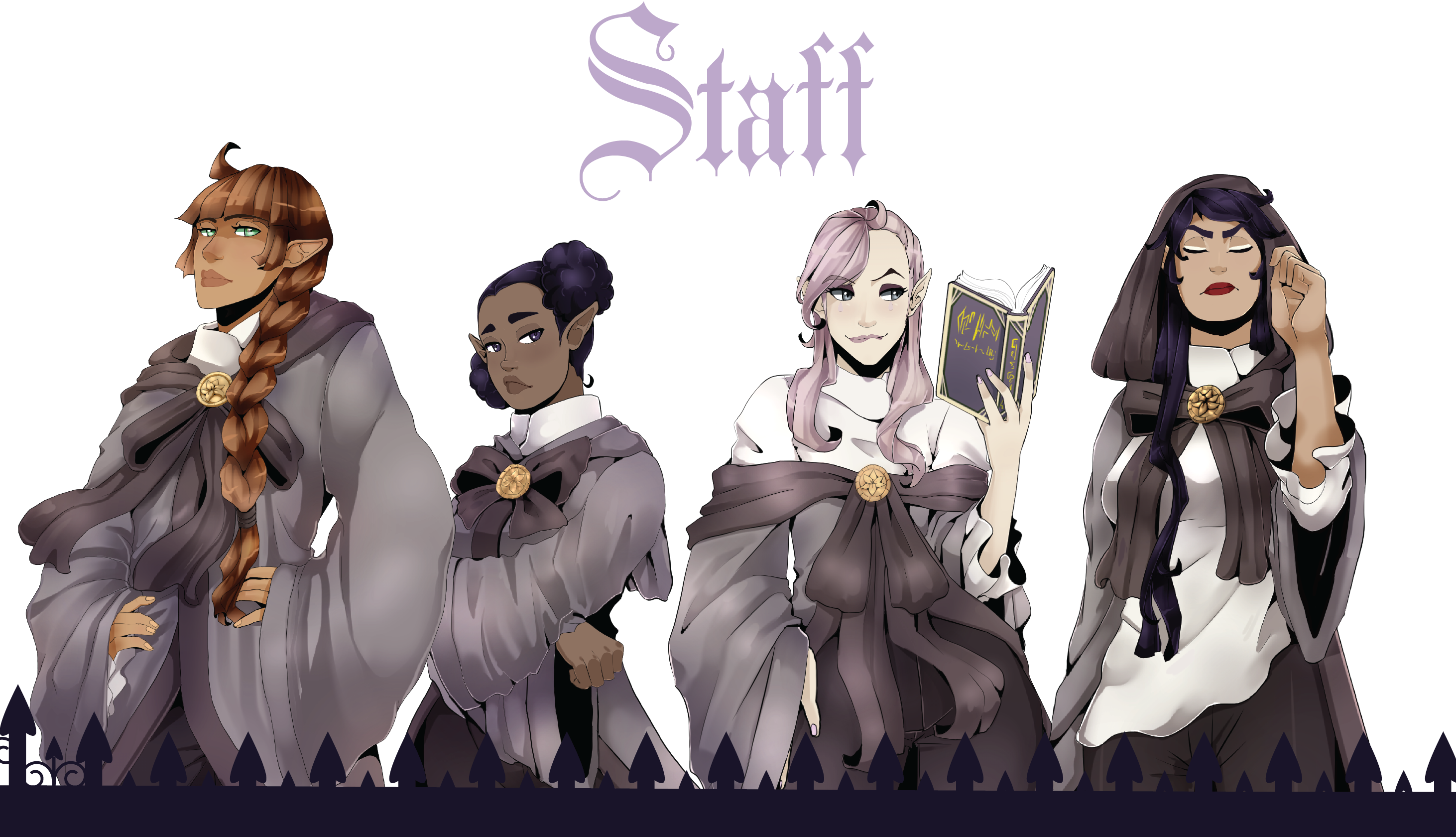 Lilith Hall also has a wide variety of teachers and trainers who ensure the girls get what they feel is the best possible education.

Lilith Hall is a spin off game/prequel of my other project, Arena Circus, but you do not need to have played that to understand the content in Lilith Hall.

In order to download this Visual Novel you must purchase it at or above the minimum price of $5 USD. You will get access to the following files:

Just a question here: how does this game lead to Arena Circus? Maybe it's just because a got what I assume is the "good ending"?

Hi there! Thanks for playing. Yes there’s only one “true” ending. I won’t give away too much, but there’s a character from Arena Circus in it.

Ending 3 is by far the most saddest and i don't understand why Raven do THAT... ending 2 and the cannon are my favs... i love 080 and I love their relationship :_)

good plot, a lot of place for choices determinating  O8O's  story. i like her backstory. she's totally focused on succes and cold but not evil person. but her roommate... the hall is not place for her...

interesting characters. 080 is my favourite

thanks for playing! Glad you enjoyed. Yep, that’s her 😊

it was hard thinking of memorable numbers xD 707 isn’t in the demo but I plan on releasing a little teaser once the rest of the acts are finished!

I would definitely like to play this! Will there be an extended game after the Jam ?

I would be sad if it was limited to a short story for ever, the setting and the story introduction sound too promising for that.

PS : I'm pretty much ignorant about how such events work. I do not mean any disrespect towards the quality of your work or the hosts of said event. Thank you very much for creating and sharing it with us.

Thanks so much for your interest! This story is definitely a short look into 080's life and how she grew up, but the world is expanded upon in my other WIP game, Arena Circus, which features 080 as a prominent character and love interest. That is a deep dive into the world and it's currently at over 100,000 words, with 3/6 chapters complete and the 4th on its way early next year. I'll also eventually be redrawing/commissioning new assets since it's been in production for about 8 years now and my art style has obviously changed.

If you're interested in learning more about the world once this game is over, you can!

Wow, this is awesome that there is so much more behind this.

I'm very intrigued by authors who not only manage to give whatever their imagination can come up with some kind of consistency over time, over places and in every character, but also to convey this "wholesomeness" to their readers. It's one thing to write a VN as mere support to a collection of CGs with a couple Yes/No choices, and another one to get it working as something believable *and* enticing in *my* mind, through *your* words.

I will make it no secret that I really dig the description you've made of your game here, since it contains a lot of what I enjoy when immersing myself in a character, following her evolution through life (in a believable, interesting and challenging setting), starting small but growing in adversity, suffering but also going through some happy times hopefully, nudging her in the right direction if possible, and of course some Yuri/romancing goodness.

I really want to play your other game now, and will definitely be following your endeavours with this new work and play it too! My first impression is that the ever-curious in me will feel disappointed if the adventure stops too soon, but I may also be wrong. Only one way to find out I guess ^.^

Sending you a small token of my appreciation through your other game page. Please have a nice and sunny day.

Thanks so much for your support! I totally agree with you, and I really enjoy creating stories and characters that can come to life and really leave an impression on people. I hope you enjoy Arena Circus and this prequel of sorts once it's complete! 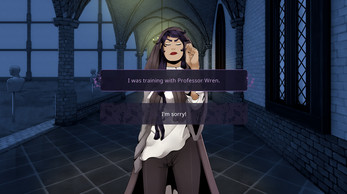 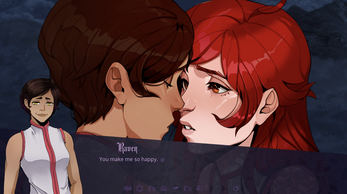 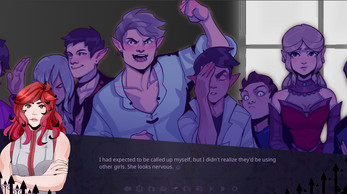 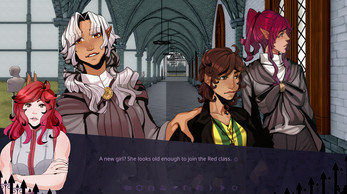